Rare events in the world

Need some strange reasons to pack your bags and explore the world? --- here is the list of rare events that will force you to witness it; to believe it. 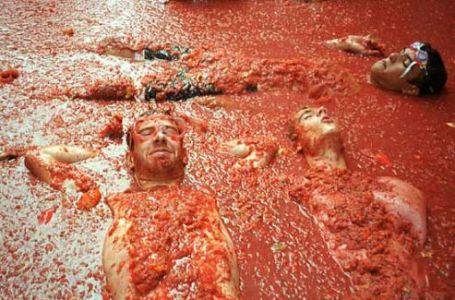 The largest tomato fight in the world is held every year in the month of August, in the streets of Bunyol, Spain. More than 100,000 kg of tomatoes are used in this fight every year.

All the beer lovers should head to Germany in the month of September to participate in the biggest beer festival of the world, Oktoberfest. Reportedly over 6 million liters of beer are consumed within the beer gardens every year.

Day of the Dead
Mexico
All those who want to live the James Bond movie - Spectre's scene; make sure that you visit Mexico in May.
Day of the Dead (Dia de los muertos) is celebrated in May every year, which focuses on gatherings of family and friends to pray for and remember friends and family members who have died.

The Rio de Janeiro Carnival
Rio de Janeiro, Brazil
The Carnival in Rio de Janeiro is held before Lent every year and considered the biggest carnival in the world with 2 million people per day on the streets. The typical Rio carnival parade is filled with revelers, floats and adornments from numerous samba schools which are located in Rio.

Yi Peng Lantern Festival
Thailand
Visit Thailand during Yi Peng Lantern Festival; to see the sky magically decorated into a sanctuary of lights. Its a festival that witnesses thousands of sky lanterns light over Pingxi District in Taiwan. It was originally celebrated to ward of evil and disease from the town. The Taipei Pingshi Sky Lanterns were released originally to let others know that the town was safe.

Hornbill festival is the largest celebration of the indigenous warrior tribes of Nagaland.&n

One of the best motorbiking you will ever experience covering 1400 km in 7 days.