For visitors, Myanmar New Year or known as water festival is one of the most amazing times to experience the long reserved tradition of the country as well having fun with the local national wide.

In the Burmese language, the new year is called ‘Thingyan’ means “moving from one year to another”. 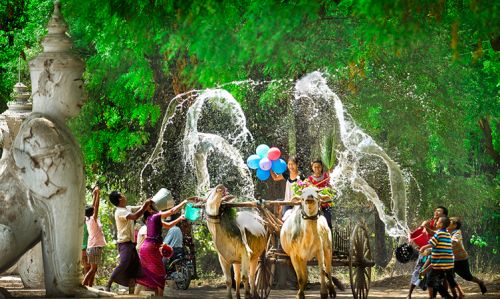 According to the ancient tradition, a human has committed sins the whole year and these sins could be only washed away by the water that thrown on others with Thingyan water.  People believe that their mind will be purified after this important festival.

During 2 weeks of Thingyan which often takes place from 12 to 17th April, Buddhist’s religious activities are held to bless pilgrimage as well local villagers.

The water festival is also celebrated as Songkran in Thailand and Laos, ChaulChnamThmey in Cambodia. A similar festival is played in India with water and color and is called Holi

Go mad in water fest with water everywhere. You will be drenched in water, fun, and love. Enjoy with the locals, it's amazingly safe. People splash water on everyone including animals

Kids use water guns to drench their friends, and everyone in the range - only monks and the olds are safe.

During the festival, do not miss the chance to fill your stomach with special sweet foods: rice balls with jiggery topped with grated coconut, assorted jelly, bread and sticky rice in coconut milk and many other delicious curries that you will not taste in a normal day. 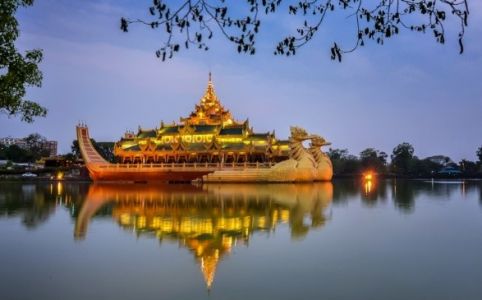 Every year once, by end of October, pagoda festival is celebrated during which the 5 Buddha images are rowed around the Lake in a colorful barge.

It is held on a large scale for 18 days, usually in October (sometimes in September). 4 Buddha Images out of 5 from Phaung-Daw-oo Pagoda are carried on the royal barge and conveyed around 14 villages on the Lake.

The barge is towed by the boats of leg-rowers and hundreds of boats follow the procession. The large crowd gathers on the lake-shores to celebrate this festival. It is really an amazing sight.

Among the dance shows and fun-fairs, the most interesting event of the festival, especially for foreigners, is their boat race - due to their unique leg rowing. It is the one and only place in the world that one can see such marvelous act.

The Buddha images were believed to have been brought by King Alaungsithu of Bagan. King Alaungsithu or Mani Sithu reigned from A.D 1112-1167, one of the longest rulers of Bagan Dynasty. The King was a great builder of pagodas and monasteries and an avid traveler. He spent much of his time on water journeys. Legend has it that the Barge he used was built of the wood that contained a philosopher’s stone. This stone gave the Barge the supernatural power of turning into the water any place the king pointed at. So once, during one of his journeys, he came to the Inle Lake and the royal barge stopped at a place. That place was marked as a sacred place and a pagoda was built. That pagoda is now known as PhaungDaw U Pagoda. Some local tribes from Dawei requested the King for their stay at the lake, due to their liking of the pleasant lake, and also for looking after the pagoda. The King granted their stay and now, there is mysterious Inle Lake.

The PhaungDaw U Pagoda Festival isheld annually for 18 days. It is one of the most famous festivals in Myanmar. Both locals and foreign visitors come to visit this traditional festival in Inle Lake, Shan State. Annually, during the Myanmar Month of Thadingyut, usually between September and October, the 18-days festival is held. The festival is held with the dates according to the Lunar Calendar of Myanmar. It begins on the first Waxing Moon day of Thadingyut and ends a couple of days after the Full Moon. (For 2015, 14 October to 31 October) 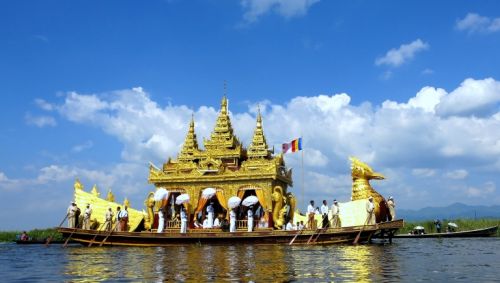 A large boat with a Golden Hintha (Hamsa) Bird creation is built. The Buddha Images tour around the Inle Lake from village to village taking the whole 18 days on the way. During the festival, only four of the Buddha Images are moved onto the royal barge. One image always remains at the temple. The decorated royal barge is towed by several boats moving by leg-rowers of Inle. The barge is towed from village to village along the shores of the lake in a clockwise fashion, and the four images reside at the main monastery in each village for the night. The high point of the festival is on the day when the images arrive at the main town of NyaungShwe, where most pilgrims from the surrounding region come to pay their respects and veneration by boats. There are hundreds of floating boats from near and far.

Enjoy Cruise, Snorkeling, Surfing, Sailing, Kayaking and Scuba and what not